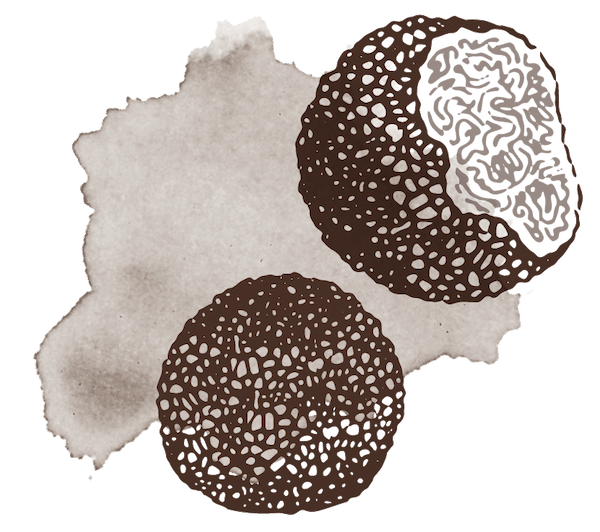 The fresh truffle is a mushroom that grows at the foot of certain truffle-producing trees (oaks, hazels, lindens, and poplars). They are found in France, Italy, Spain, Australia, and a number of other countries.
Fresh truffles are harvested (or “hunted”) during their growing season, either in the wild or on truffle farms.
There are dozens of different truffle species throughout the world, but only four or five are really sought-after for consumption.

A fresh truffle is born

It takes a natural process called “mycorrhization” for a tree to produce truffles. Mycorrhization is a process of perfect symbiosis between a mushroom (in this case, a truffle) and a tree root. This process can happen naturally (in which case the truffles produced will be considered “wild”) or in specialised tree nurseries that produce and sell “truffle-producing seedlings.”

Once the truffle-producing tree is planted, it takes seven to 10 years for the first fresh truffles to form. It’s important to know that the truffle harvest depends on many natural factors that can affect the quantity and quality of truffles produced: the type of soil, climate, the vagaries of nature, etc.

This is why fresh truffles are so rare and valuable. Each season, the truffle harvest is unique.

The different varieties of fresh truffle

There are different varieties of fresh truffles, each one harvested in its own specific season. Each truffle species has its own special characteristics in terms of appearance, taste, aroma, and more.
Each truffle species has a scientific name in Latin that starts with the word Tuber. It’s the second part of the name that tells you the exact species: Tuber melanosporum for black truffles, Tuber aestivum for summer truffles, etc.

The most well-known and most emblematic fresh truffle variety is the black truffle, Tuber melanosporum.
The black truffle is harvested in the winter, from mid-November to mid-March.

Also sometimes known by the nickname “black diamond,” the fresh black truffle is the favourite of foodies, restaurateurs, and Michelin-starred chefs. It’s easily recognisable, with black skin and flesh that’s marbled with elegant white veins. Its intoxicating aroma and subtle taste are easily recognisable for connoisseurs. 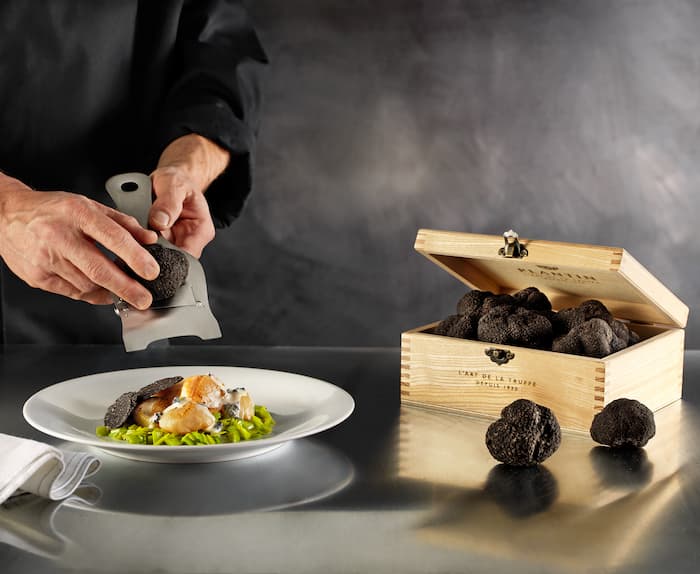 After black truffle season, from April to the end of August, the summer truffle, Tuber aestivum, takes centre stage. Much more mellow than the black truffle, it is the summertime fresh truffle par excellence. It goes perfectly with fresh summer dishes featuring vegetables, fish, and more. While it has a black exterior, it can be recognised by its very light—almost white—flesh early in the season, which gradually darkens to a chestnut colour in July and August.

Next comes the Burgundy truffle, Tuber uncinatum, also called autumn truffle. This fresh truffle has a black exterior and dark brown flesh. In a way, it’s a cousin to the summer truffle, but its woody flavours are more pronounced. It can be hunted from September to November.

Around the same time as Burgundy truffle season, from October to the end of December, is the season of the Alba white truffle, Tuber magnatum. This fresh truffle can be recognised by its pale yellow, occasionally ochre, exterior and its flesh that ranges from a creamy white to white with pink flecks, depending on the maturity. Its very distinctive flavour is reminiscent of garlic or cheese. It is the rarest and most precious of all truffles, and also the most sparingly harvested. 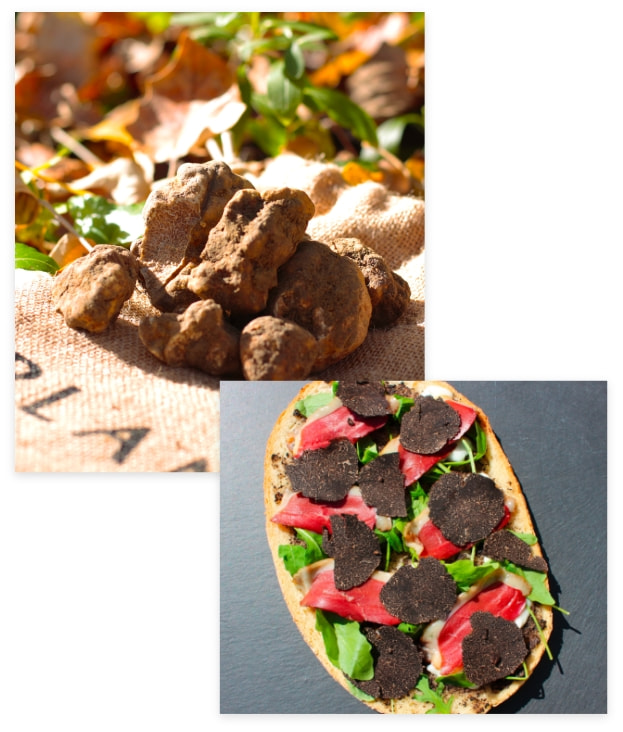 How do you cook fresh truffles?

The way to cook fresh truffles varies a little from one truffle species to the next. Still, they all have one thing in common: they do not tolerate the heat well, much less cooking.

While black truffles can be heated to release and disperse their aromas, Alba white truffles and summer truffles cannot stand heat and should be grated over your dishes just before serving.

Frozen truffles should not be thawed before using.

How do you store fresh truffles?

The fresh truffles that we ship to you have already been washed and are ready to use. To store them, they must be gently removed from their bags, covered in absorbent paper (to be changed every two days), and placed in a sealed container.
You can also freeze them in a freezer bag for usage at a later date. 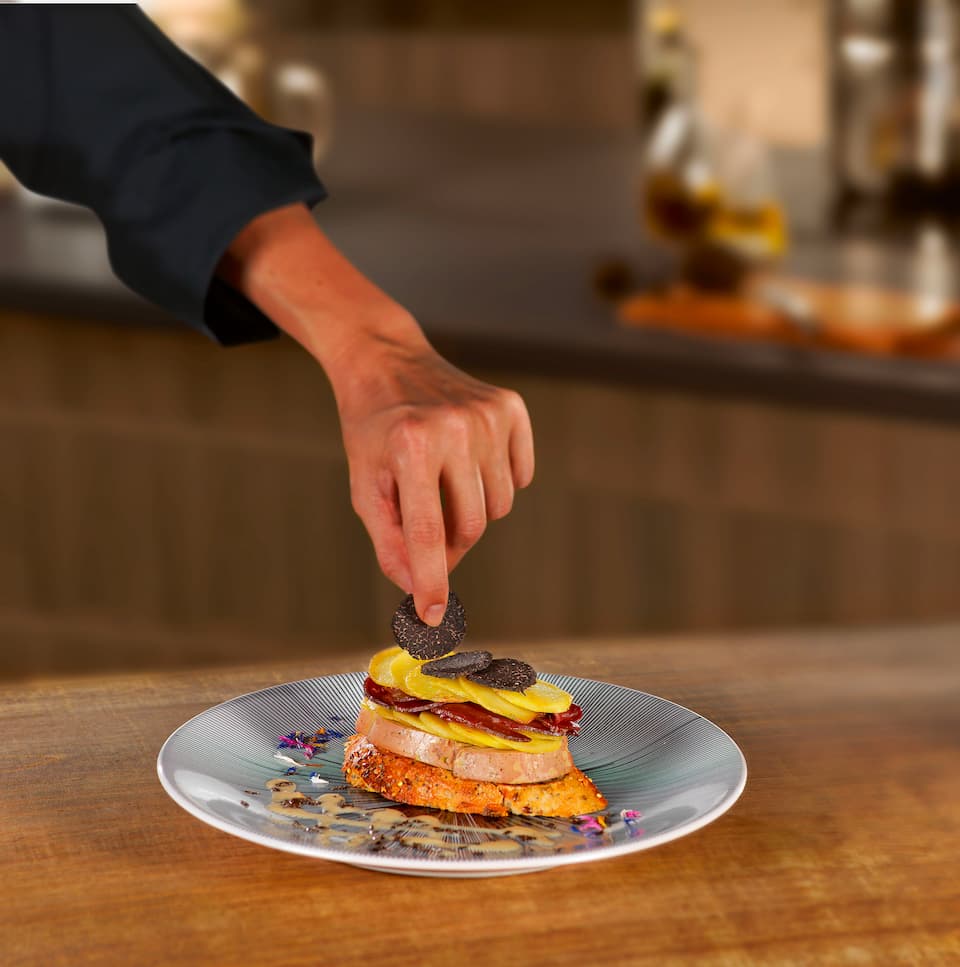 Our Truffle Masters, Ella and Eric, manually sort and select the best fresh truffles in order to offer you the best possible flavour experience.

Once they’ve shipped, your fresh truffles are transported in a refrigerated vehicle to guarantee that they’ll be perfectly fresh when you receive them.